World of investing is like test cricket. Both require specific style, temperament, homework to be successful

Cricket is India’s favourite pastime. Find yourself in a café or one of the many tea stalls that line the road on a match day and you’ll invariably get a ball by ball analysis of the match and how the players could have done things differently. On a non-match day, however, you might be lucky enough to discover the next multi-bagger. At the onset it might look like all that cricket and investing have in common is numbers – runs, wickets, batting averages, and sales and market price and the like. But a serious cricket aficionado who is a professional money manager and he’ll tell you how the similarity between cricket and investing goes beyond just statistical numbers

Bull markets are like the flat pitches of the sub-continent that are batsmen friendly giving little assistance to the bowlers. Just like that in a bull market with a momentum strategy, return come regardless. If we look at the record of the cricket legend, Sachin Tendulkar in different conditions it’ll tell a similar story. In India and Bangladesh his average is 50 compared to 39 on the tougher pitches in Australia, England and South Africa. 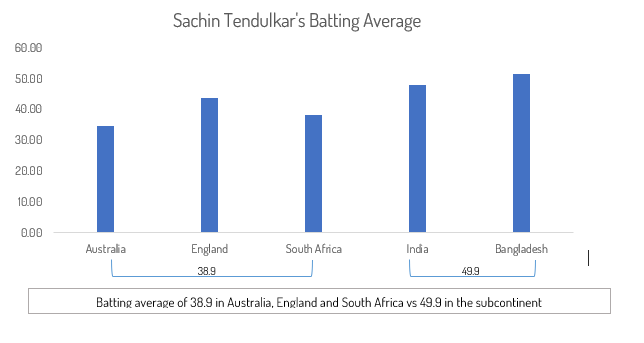 Bear markets are like batting in English conditions, lots of swing, slips, pace and bounce. In such conditions most players know it’s not safe to play ball outside the off stump with 5 slips but more often than not they do. It is a mental game at that point and batsmen eventually run out of patience. Bear or consolidating markets throw similar challenges for a value investor. It becomes increasingly difficult to distinguish between a value buy and a value trap.

Like batsmen tired of not getting a chance to score, investors get impatient with the markets, take decisions they would normally avoid. Market is not known to be merciful and ultimately the loss of confidence turns out to be a bigger loss than just the money. As a portfolio manager, it is difficult to deal with constant cash inflow and full deployment policy.

As an equiy investor it is better to be a value investor and play defensive like Rahul Dravid with ultimate price on his wicket, and have capital protection as your guiding principle.

Then there are players like Rohit Sharma, Yuvraj Singh who have seen phenomenal success as T20 players but haven’t been very successful in Tests, the longest and toughest format of the game. In a T20 match it is not the wicket that matters but the runs and how fast you can score those runs. It is a sentiment driven format much like how traders operate in the stock market. The decision making is price based and the business is not generally a focus. They spot an opportunity, capture the trend, make their return and are out of the position. There are various terms for this style of investing, namely, smart alpha, trend investing, breakout, or quant investing.

Batting conditions differ and investing environments differ. A bull investor will often fail to perform in a bear market. A portfolio with defensive low beta bets will not do well in a bull market. And a portfolio which will do well in the bull market will fail to outperform in a bear market. Warren Buffet is possibly the most well-known value investor. If we look at Berkshire Hathhway’s performance it tells us a similar story. In the years of tech crash of 1999 and subsequently, he outperformed the S&P 500 by 24 %. Again during the subprime mortgage crisis 2008, Berkshire outperformed the market by 5.2%, but when that was followed by market revival and subsequent bull run in the US Markets, the performance was less stellar. The same story repeats itself in the during the 2008 mortgage crisis and subsequent bull market in the US. Virat Kohli’s batting record sings a similar rhyme, being spectacular in certain conditions while just making the mark in others. In Asia, Oceania and Africa his batting average far outshines his performance in Europe and America. 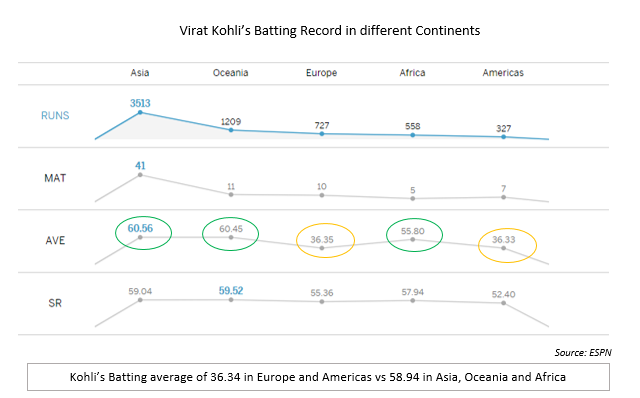 Ultimately what might decide if you are successful is how prepared you are for what’s coming next in the market or the team and conditions you are going to face in a match. You have to develop a judgement about whether the market is changing course after a bull or a bear market or it’s a fake pull back much like if a ball is a reverse swing.

All that is not to say that sometimes, even after all the number crunching and late night practices, you might still get stumped. A macro issues out of nowhere, a natural calamity, even a tweet from the leader of the free world, can leave the best investment thesis struggling. But as discussed previously, if you control your losses and focus on quality of holding and valuations, long term outperformance is inevitable.

Finally, in cricket as in investing what happens on the field is an output of the process and discipline followed behind the scenes rather than random shots and investment picks.

A player will need to be well versed with the weather conditions, the pitch and plan before sets out to bat. He will have to anticipate the field placement that the other team will deploy the bowler’s strengths and weaknesses. Similarly going into market everyday an investor needs to understand the sectors, the business, the market and macro sentiment and need to analyse the future growth and profitability of the company.

Eventually, the player has to keep an eye on the ball and play each ball as it comes on its own merit. Same way an investor need to judge each investment on its own merit and its fundamentals rather than just price volatility. As Warren Buffet famously said, “No one will judge you for the investments you didn’t make”.

Vishrut Pathak is an MBA from St. John’s University, with specialisation in International Finance and has a PGD from New York university in Financial Statement Analysis. He was Vice President at HNW Inc. for 6 years where he worked with leading institutional clients like Lord Abbett Merrill Lynch, CitiBank and Morgan Stanley. Prior to HNW Inc, he worked as a senior analyst for a growing Buyout firm in New York in hospitality industry (IT Hospitality Inc.). After working for 10 years with various financial firms in New York, he founded “Pi Square Investments” in Jan 2011. He has over 20 years of Investment Management and corporate finance experience and also Mentors at EDII (Entrepreneurship Development Institute of India) under CrAdLE platform.