“Grass is always greener on the other side” I think many young Indians will feel the same way who left India in early 2000’s to pursue career growth. I left India in YR 2002, an early stage of India’s growth story, as all the asset classes across India have multiplied 5x in nominal terms in last 8 years. In the same period, most of the asset classes in North America saw zero to nominal gains. However, some threats to this scenario are gaining credence. First, inflation has proved far stickier on the way down than one would have thought. The expected monetary easing cycle may be further off than what the bulls are expecting. Many investors are also expecting commodity prices to go parabolic after a positive monsoon, which can potentially derail any RBI easing.

As a full-time student of Economics, I always look for a larger picture. Our goal in this post is to see the economic future of the next decade in India, so we are purposely ignoring many commonly talked indicators like GDP, Industrial Production, PMI & so on.

Trust in Government:  We are not the first one to write this but recent stories of scandals & scams were a real example of how not to attract international investors. India is missing a leader/ decision maker in New Delhi to drive India’s economy to the next level. India is on the race-track with a new shiny car with no driver. When developed worlds are slave of their habitual love of debt accumulation, India has found slavery in corruption. Although we are glad that commonwealth games & 2G scams might work as a wakeup call for India’s politically inactive middle class.  Score – Big minus

Lack of infrastructure:   India needs to double its infrastructure spending to $1 trillion in next five years to achieve 10% annual growth rate and would require new funding sources, as the prime minister rightly said earlier last month. The country needs to upgrade its creaky and inadequate infrastructure to support growth that is expected to accelerate to 9% by 2011-12, and bulk of this new investment would come from private firms. Infrastructure will provide huge investment opportunities in private and public sectors. New Delhi will have to focus on this tremendous speed and invest much higher percentage of GDP to match the growing demand.  Score – Average

Inflation: 9.8% of wholesale-price inflation must be keeping Mr. Subbarao up at night. RBI’s comfortable zone is 4 to 6% (which is still pretty high). For us two major factors driving the prices in India are rapid credit growth and volatile oil prices. When aggregate credit is growing at 20- 25% Y-o-Y, much of the rural India is still untouched and hardly have access to formal credit. So when RBI is actively managing credit growth, same tools might not be as effective as in US or Europe. Inflation cycle is picking and interest rates increase will come to an end soon, contrary to market opinion I think RBI won’t stop here.

For us this is the biggest negative sticky point for India & a true test for RBI if they can balance growth and inflation. Score – Negative

Credit Growth:  India’s growth story is largely attributed to the domestic consumption driven by rapid credit growth. Millions of consumers who had no access to credit in earlier decade can purchase new house, automobiles, appliances or many more things with easily available credit. We would have been worried if the banks were flushed with large NPA but banks are growing at a healthy rate with a low NPA (thanks to RBI’s conservative stance during the last decade). We are still amused; how public banks are still the only source of credit for the SMEs (small & medium enterprises). Absence of a liquid bond market is still a mystery. For now, thanks to large looming demand for the affordable housing, credit growth will continue for many more years to come. On the other hand, most of the borrowers are deleveraging in US & Europe. Score – Big Positive

Real-Estate: How can we miss writing about the preferred investment when last decade has created thousands of overnight millionaires in India. Unlike US & China, India has a huge shortage of affordable housing. Debt-laden large realty companies will have to change their focus from luxurious housing to affordable housing. India will need to add more than 200 cities in next 10 years to accommodate growing urban population. Score- Big Positive 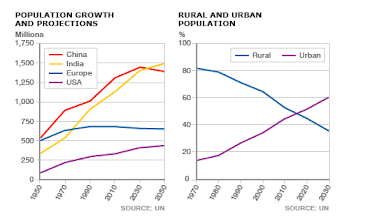 Demographics:  India has a huge demographic advantage in coming decades compared to other emerging economies. India’s non-working population (60+) is merely 7.2%, while almost 60.5% population is in highly productive age group of 15 to 59 years. The rest 32% is below age 15, which will keep adding in to the large work-force. In US on the other hand, baby boomers have already started hitting the retirement age. India’s working age population will overtake China’s in next 10 years, making India’s workforce largest in the world. Score – Big Positive

Global uncertainty: “The world is flat” – globalization has connected international economies more than ever. India’s dependence on global economies is much smaller than other emerging economies and her share will keep growing in coming years. India’s growth will slow down if  EU economies’ default or restructure their debt, but in the long-run India’s growth will be more driven by local consumption .

We believe, for the long term investors it will be a wealth creation of unprecedented diversity and depth. Of course, the ride to riches won’t be smooth – it has never been, even for the richest people and nations. There will be periods of dramatic swings and falls in fortunes. But if you act now and act right, you can create a life-time wealth in 10 years or even less. We recommend investors to hold their assets in liquid bonds for short term and enter real estate + capital markets, once positive news starts flowing in.

Vishrut Pathak is an MBA from St. John’s University, with specialisation in International Finance and has a PGD from New York university in Financial Statement Analysis. He was Vice President at HNW Inc. for 6 years where he worked with leading institutional clients like Lord Abbett Merrill Lynch, CitiBank and Morgan Stanley. Prior to HNW Inc, he worked as a senior analyst for a growing Buyout firm in New York in hospitality industry (IT Hospitality Inc.). After working for 10 years with various financial firms in New York, he founded “Pi Square Investments” in Jan 2011. He has over 20 years of Investment Management and corporate finance experience and also Mentors at EDII (Entrepreneurship Development Institute of India) under CrAdLE platform.